For the fourth time this year, the Bulgarian nurses took to the streets to demonstrate for their justified concerns. The determined and courageous nurses have been struggling for more than half a year for the urgently needed improvements of their working conditions, furthermore they are struggling for a necessary change of the health system, which has to serve the people! From the beginning the protest of the nurses was boycotted, sabotaged and attacked by the ruling parties, the official media and the established trade unions. The nurses remained steadfast, showed great determination and organized themselves to fight for their interests!

Last week, on Wednesday September 11th, nurses, medical staff and supporters from all over Bulgaria again came to Sofia to demonstrate against catastrophic conditions in the health system. There is a massive lack of nursing staff, wages are not enough to secure the existence of a worker and her families, corruption and the sale to foreign companies are benefiting a few at the expense of the Bulgarian population! "This health system is a disaster for the whole population. We will continue this struggle because we are convinced that we have no other choice," said a struggling nurse.

The protests started on March 1st this year, with demonstrations and actions in already 30 Bulgarian cities. The protests were initiated by an angry statement in the social media and a group quickly began to organize itself. "It all happened very quickly. Nobody knew anything and there was no support from the organizations and trade unions, they boycotted us", one of the organizers said. "At the beginning they tried to explain to us that it was illegal to demonstrate without a union and did not want us to register a demonstration. One of us then filled out the form for everyone, then they did it themselves" The nurses organized a second demonstration on March 25th. The movement grew, other sectors of the health service followed, this time there were 49 demonstrations all over Bulgaria. One nurse reported of a colleague who alone organized 154 nurses for a warning strike.

There are about 30,000 nurses working in Bulgaria, but it would take more than twice as much, actually 60,000. Actually a nurse has to care for 30 to 40 patients, including those who need intensive care. "It is impossible to see a quality there. One nurse works for three, but gets only half the salary," says one demonstrator. "It is not enough to provide for our families, so many also have two or three jobs.” The wage is slightly more than 400 Leva, which corresponds to about 200 Euro. How dramatic the situation is also shows that 80% (!) of the working nurses are already pensioners. The average age is 53, and there are even a few practicing nurses at the age of 80! One of the organizers shows a video showing an old woman entering a hospital with the help of a stick. A completely normal picture, one would think: a patient on the way to treatment. But "this is my colleague", were the words of the activist! "Many colleagues are overworked and sick. Often they are more sick than the patients. After a 24-hour shift, the patients ask us if we need water." 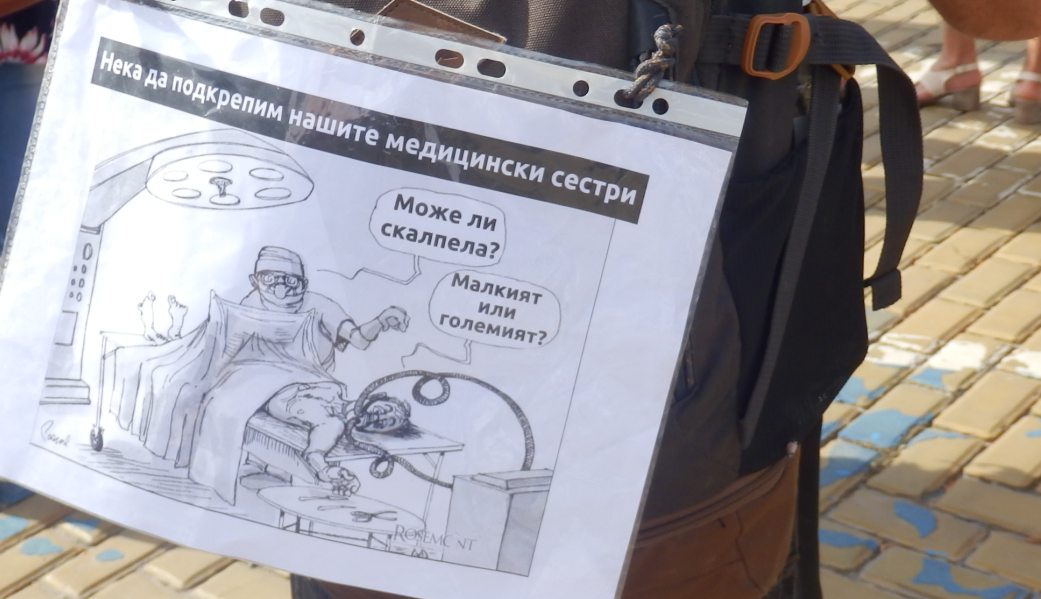 It is a big problem that there are no young colleagues. Over the last 20 years, about 30,000 nurses have gone abroad to work. Even in a large public hospital there is a situation where there is only one young nurse. "Because wages are so low, the young colleagues go abroad as soon as they have finished their training. Nobody stays in Bulgaria.” Most of them, according to the nurse, went to Germany and Great Britain.

Another problem is corruption and privatization. A lot of money ends up in private pockets, from doctors and foreign investors. Within seven years in the 2000s alone, 40 private hospitals were built in Bulgaria. An activist at the demonstration reported, for example, on Japanese banks operating clinics as private enterprises to make a profit out of the Bulgarian population. This is exactly what the west-European pharmaceutical companies do, or what the fact shows, that hundreds of thousands of trained Bulgarian nurses are exploited in the imperialist countries as unskilled workers or home care workers. It is foreign, imperialist capital that created the ground for corruption and privatization and which is taking profits from it. While taxes, insurance and once more 50% (!) deductibles in medical services are pulled out of the people bags (with already low wages), the purse of the foreign exploiters and their minions are filled. Many nurses who took part in protests for opening up to the West as young people in 1990, today detect that as a big mistake. That not only accelerated the sellout of their country, but also opened it up to western imperialist capital, further selling Bulgaria's autonomy and self-determination.

The nurses went to the Ministry of Health in the spring of 2019 with their demands, saying what the situation is in the hospitals. They confronted the ministers with the fact that many hospitals receive money, for example for wards that sometimes do not exist, for patients who were sent home days ago, but the money ends up in private pockets. Then there was silence.

A little later the nurses were blasphemed. They were called "hysterical women" and they were badly abused. As before the official trade unions kept out of the struggle and tried to sabotage them. Colleagues were dismissed with the blessing of that union. They once again showed their real face in these struggles: dirty servants of the exploiters, who are closer to the interests of the rulers than those of the workers and the people!

On May 15th, the nurses organized a nationwide demonstration in Sofia. 2,500 people participated. "It was a very emotional protest. With rain, sun, then rain again... but the women were determined. A big intersection was blocked and the police could not stop us. All these women, although they have a really low salary, organized buses, etc., partly over distances of 500 km, to come to Sofia for the protest." After this protest, the Minister of Health announced that he would spend 50 million leva (about 25 million euro) extra on the hospitals. The bourgeois media also reported that the nurses would now receive double pay. The nurses also get that information through media. It turned out to be a lie! As a grubby lie of the rulers to try to take the justified struggle of the nurses its further legitimization in public.

"Many Bulgarians are poor, they try to survive. People sympathize with our struggle, but they do nothing, they don't support us," an activist characterizes a problem of broad mobilization. "That's why we shouted: We fight for you". During the last demonstration on September 11th, some people spontaneously joined the demonstration, others applauded from the roadside.

Even if the demands have not yet been implemented, the protest of the nurses has already won important victories: "The nurses now became known in public, before they did not exist, only the doctors did. The nurses were always pushed down. Now they have a voice, now they have risen. We are no longer just women who submit. That was not expected from us, everyone was surprised. Now we have dignity, they have recognized us as serious and threatened us with being dismissed." Furthermore, the organizers of the protest emphasized: "Nurses all over the world are frustrated and it is a typical profession of women. Our uprising to struggle is true emancipation. It's an international struggle, so it's our plan to organize ourselves internationally."

The fourth demonstration last week may have been smaller than the last one in May, but it showed a new quality. The nurses did not remain isolated, they were strongly supported by the Autonom Workers Confederation (Автономна Работническа Конфедерация), by workers from Neochim in Dimitrovgrad, an independent union of paramedics, many workers from other sectors, by some doctors and medical students, and by patients! The nurses also showed that they have no illusions in the ruling parties, nor in the rotten official trade union organization CITUB. "CITUB has been working for years against the workers in the service of the rulers. Nurses are not the first workers they try to destroy, but we will bury them. It is over with them and their fake organization!", a challenge in front of the building of the CITUB union said.

With the past protest it was successfully started to tie a strong bond between the struggling nurses, struggling unions and workers of other sectors, as well as the revolutionary and anti-imperialist movement, which necessarily has to play an important role in these struggles! This means an important strengthening of the protest, which was expressed by all the demonstrators, but especially by the determination of the nurses. They are not showing fear, but moving forward, agreeing that it was their only mistake to not began much earlier to defend themselves and struggle!

"We will continue this struggle because we are convinced that we have no other choice.” 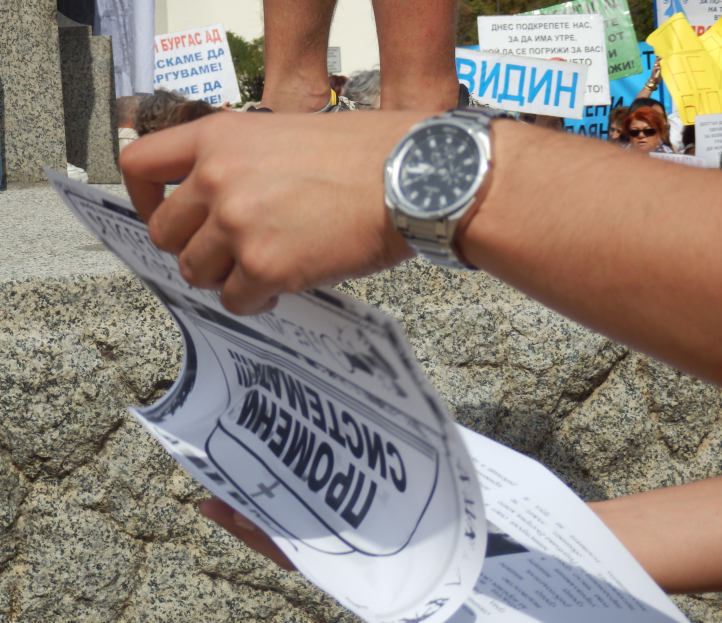 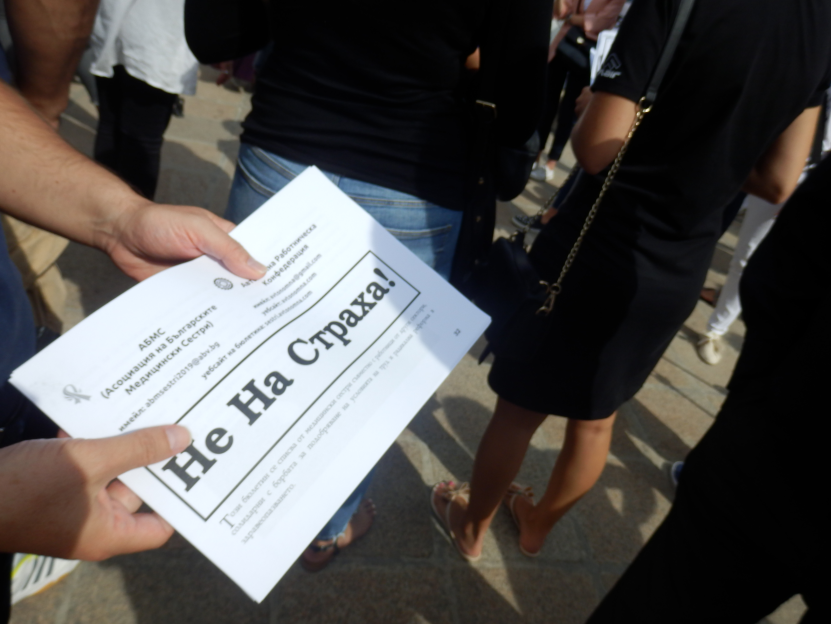 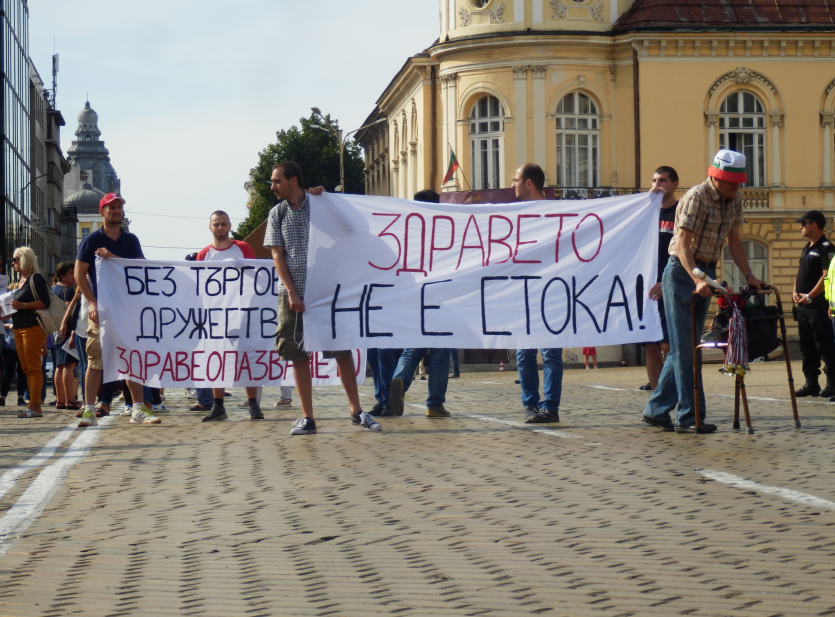 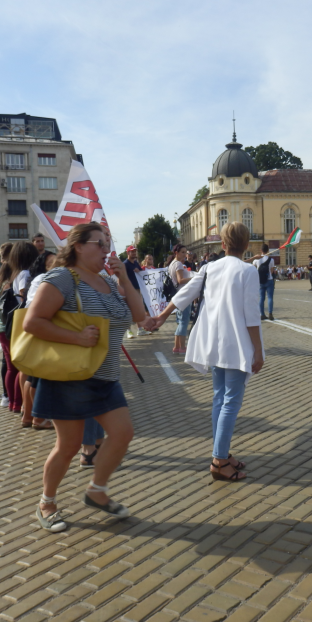 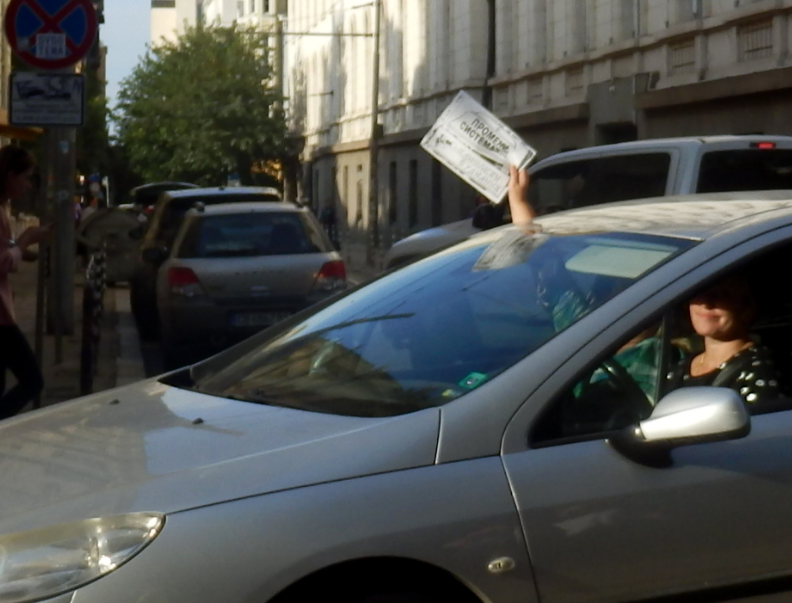 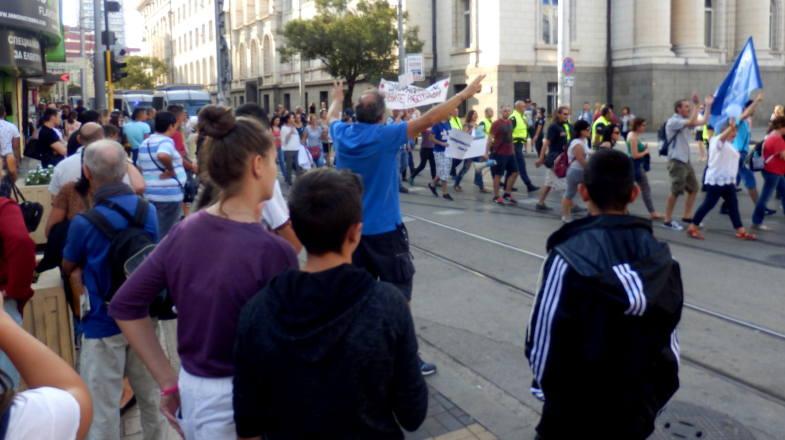 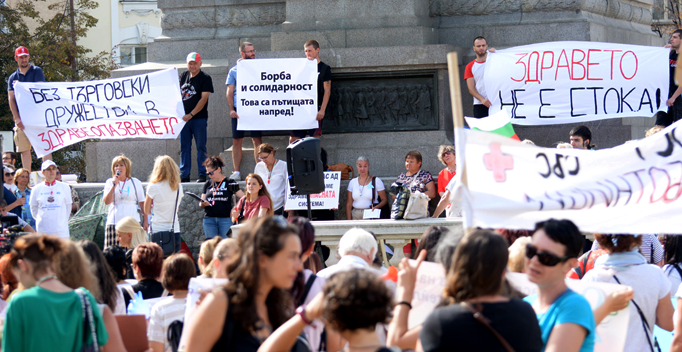 AUSTRIA - "We are not paying for your crisis!" - lively demonstration

SERBIA - "The misery of the oppressed in the Balkans"