We mirror an article on the first boycott campaign of the Marxist-Leninist-Maoist Parties and Organisations in Europe, "Elections No, Revolution Yes", published over at DemVolkeDienen.org.

Last Sunday, the so-called European Elections finally came to their conclusion. Considering the revolutionary viewpoint, these elections were marked by the 1st Joint International Boycott Campaign for this kind of election to ever take place with such a coordinated effort of Maoist Parties and Organizations in Europe. Organizations from Finland, Galicia, France, Austria and Germany signed one common call together with organizations from outside the EU that supported the campaign, such as from Peru, Turkey and Norway. Apart from this, comrades in Denmark and Sweden made great efforts spreading the call of boycotting the elections in their respective countries.

The slight, and first time ever, increase in the turnout - already foreshadowed by indicators such as the first-time-ever rise of voter turnout experienced in the last years in the EU’s country with the highest numbers of votes, Germany, or the coverage on the ramifications of the Brexit situation – is unable to compensate the fact that majority of countries struggle to even mobilize 50% of eligible voters (not to mention over all population) to the elections and that the deepest and broadest masses rejected these elections. Belgium, Luxembourg and Malta are the countries with the highest turnout, while Czechia, Slovenia and Slovakia have the lowest, once again showing the importance for the revolutionaries to unite with the struggles in these heavily exploited countries within the EU. As such, the anti-imperialist call signed by ex-Yugoslavian and Romanian organizations as well as Turkish migrant workers organizations alongside Austrian and German comrades is a great impulse.

As the first reports on the campaigns from the various countries are being disseminated and published at the respective websites, the following is an initial documentation of some of the action that have taken part, subject to be updated as more reports surface.

Comrades in France kicked off the Boycott Campaign in their country very combatively, having a burning ballot box and the campaigns slogan as their front banner in their block of the May Day Demonstration in Paris, carried by masked activists. Later that month, this banner was also put up at an event of Turkish comrades organized in Germany, hanging alongside French, Turkish and Austrian/German boycott campaign posters – a fact that is very concise and draws a sketch of the internationalist character of the campaign. 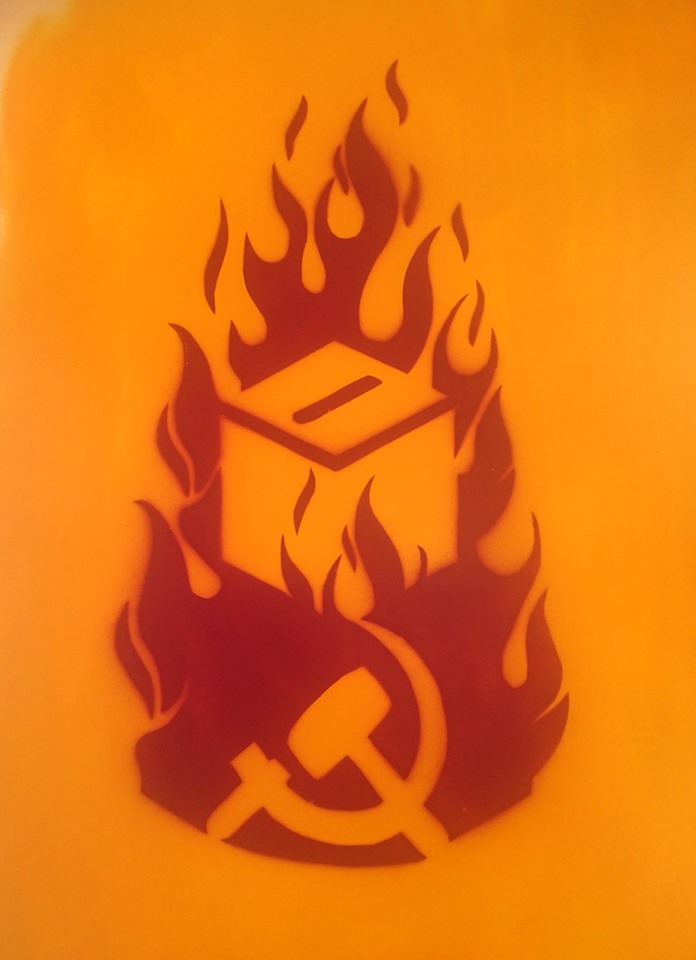 Apart from banner actions, comrades produced leaflets that were distributed massively, painted slogans, issued a declaration and put up posters. All of this actions were done in several cities throughout the country. According to the reports published by the comrades of La Cause du Peuple, actions took place in Paris, Clermont-Ferrand, Marseille, Montpellier, Lyon, Lons-le-Saunier, Saint-Etienne, Metz, Saint-Nazaire, Colmar, Cherbourg 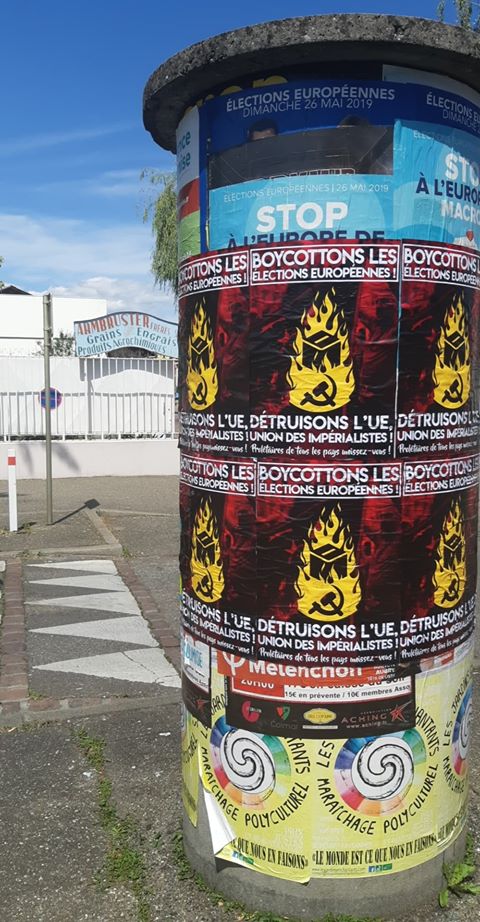 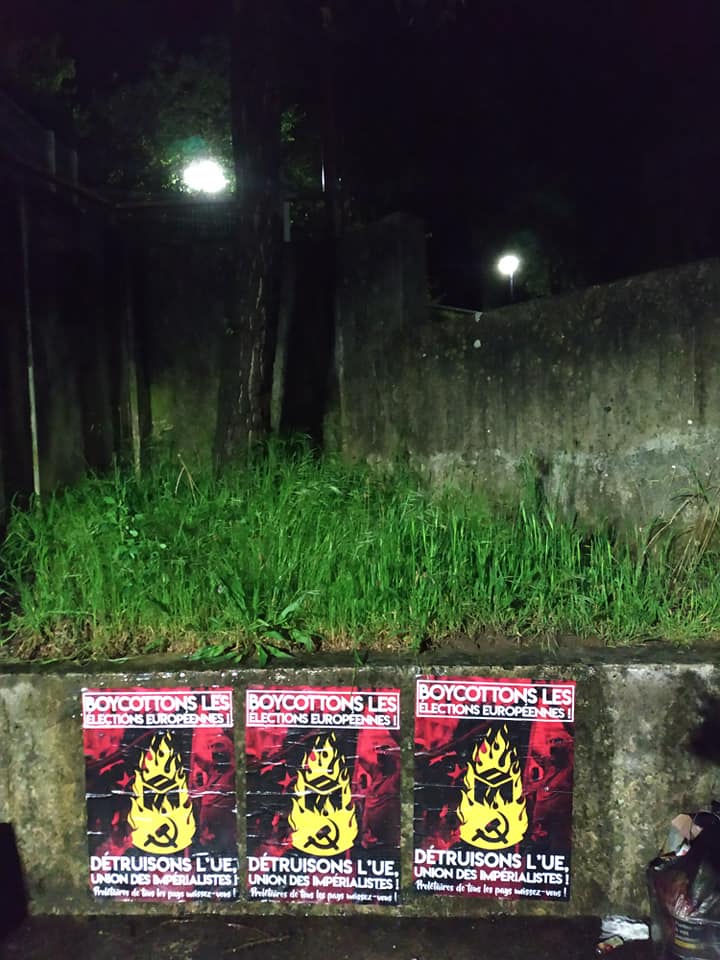 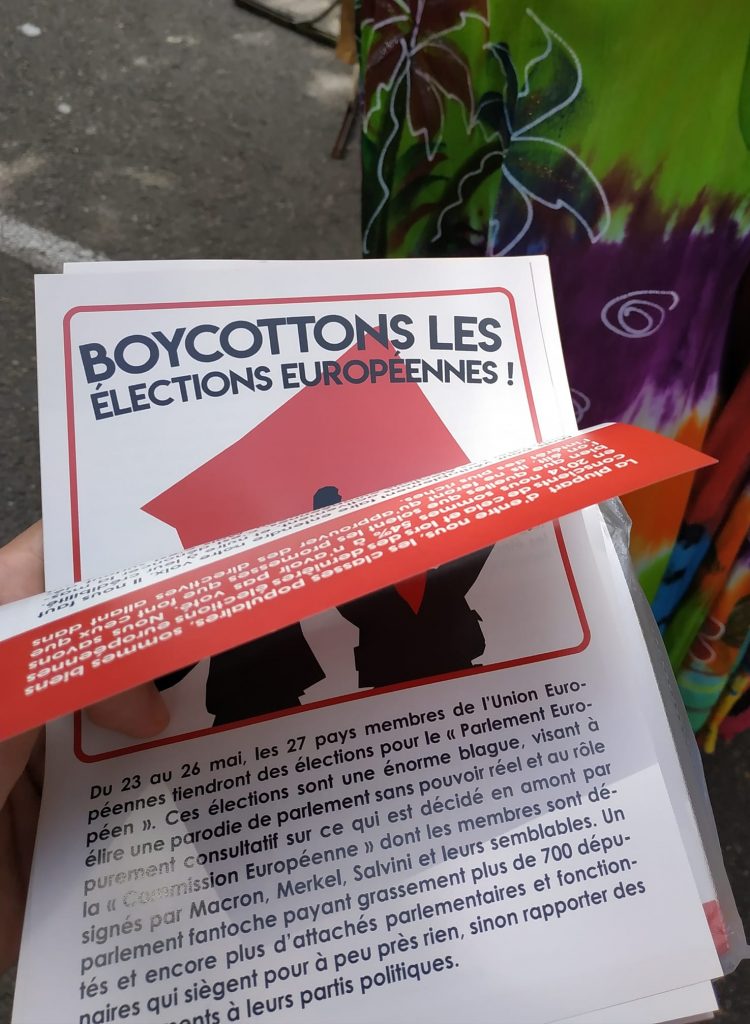 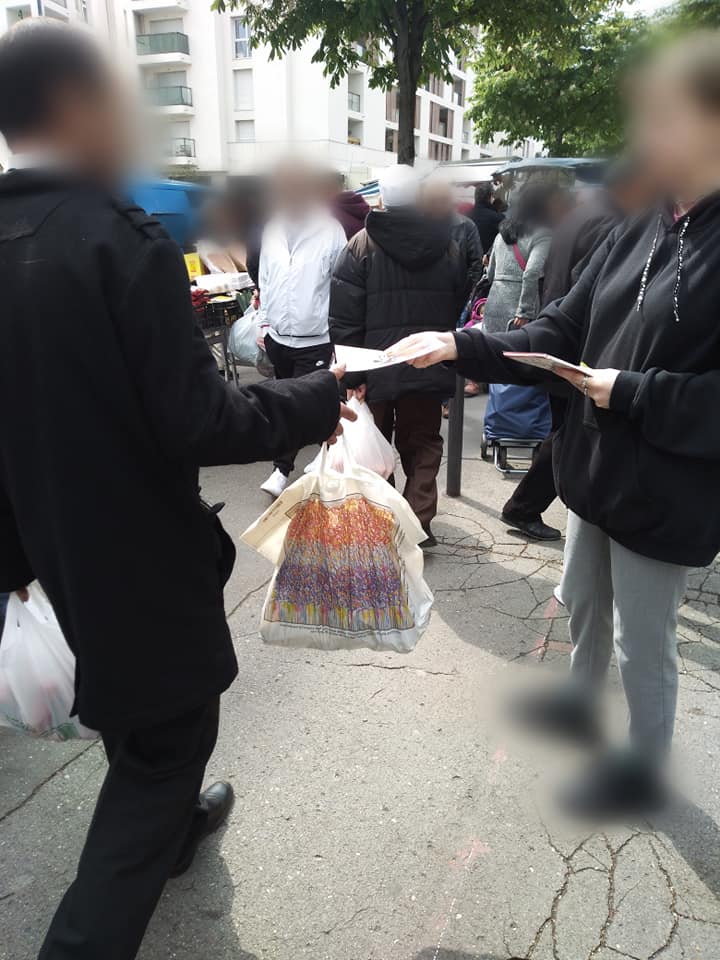 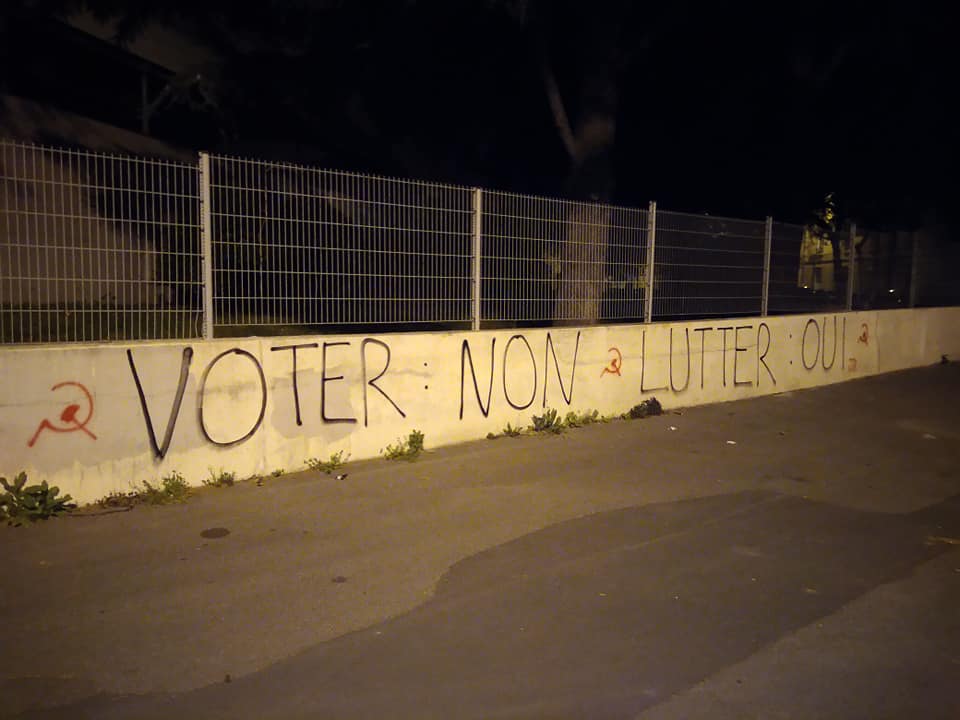 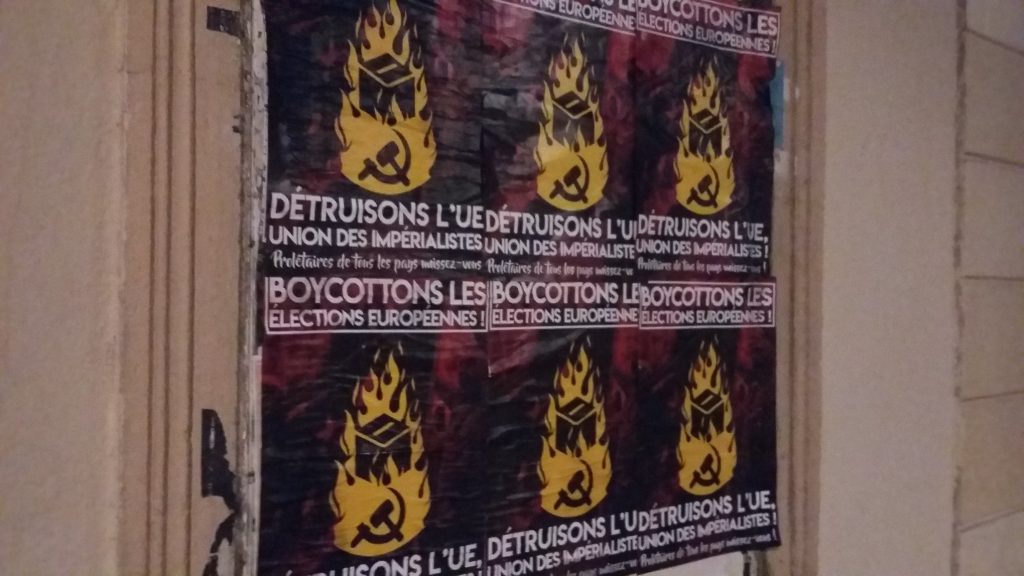 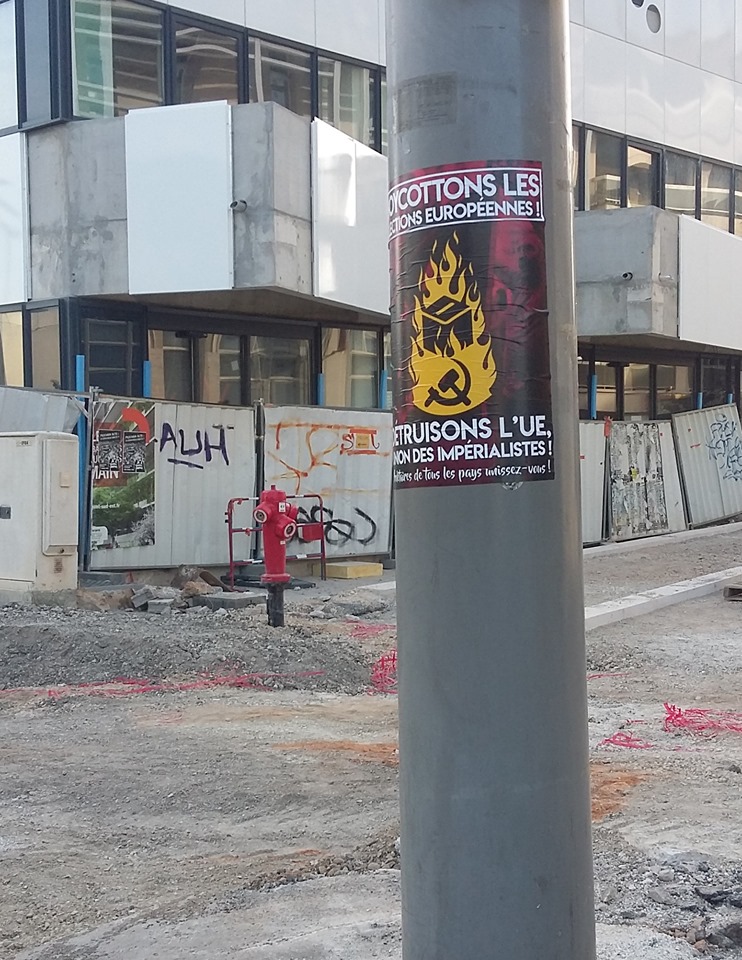 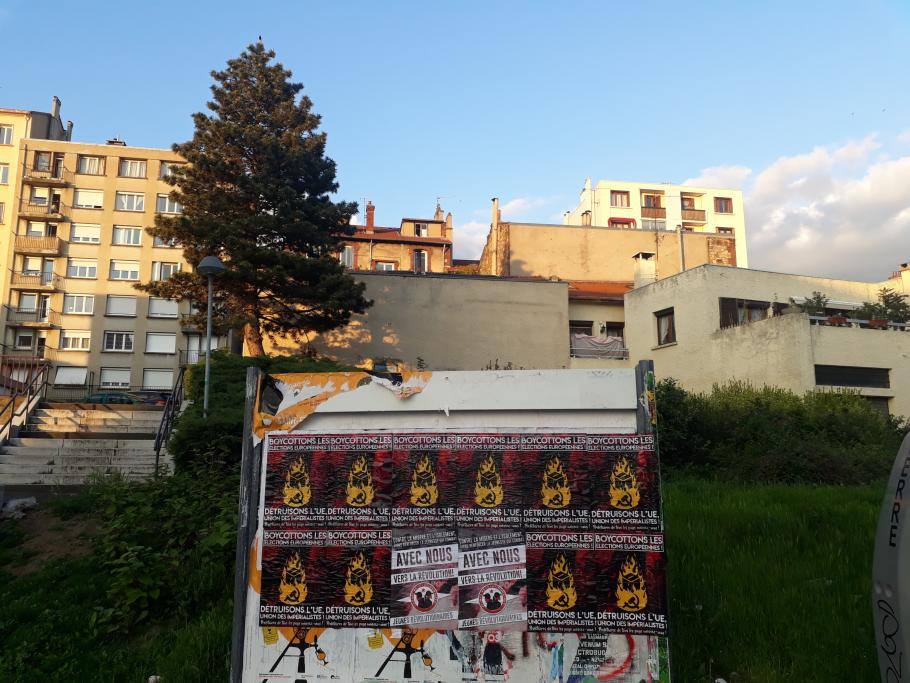 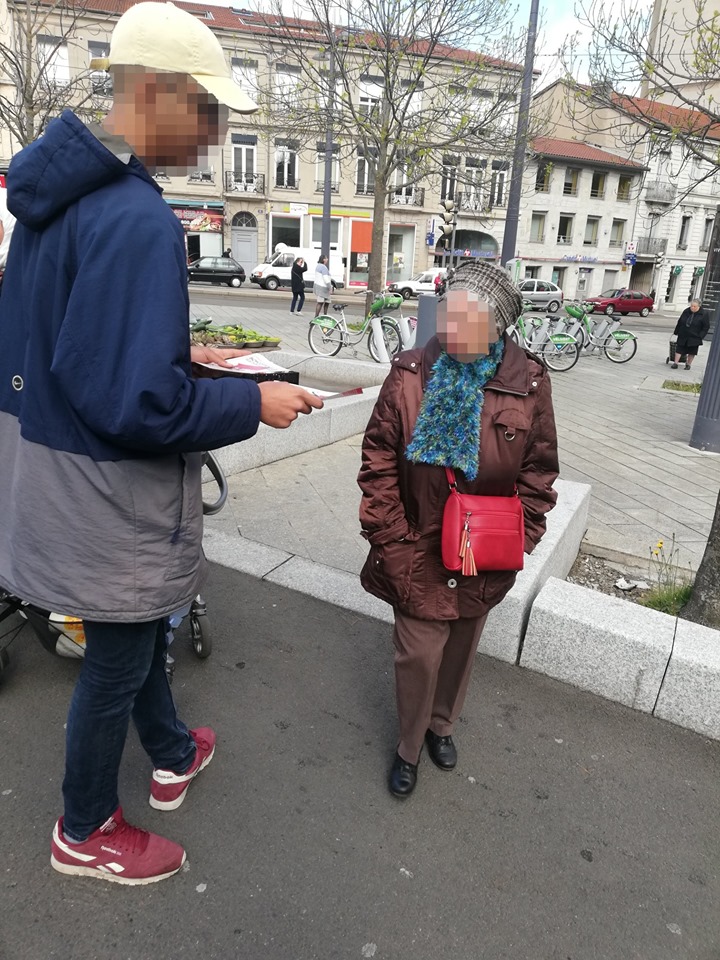 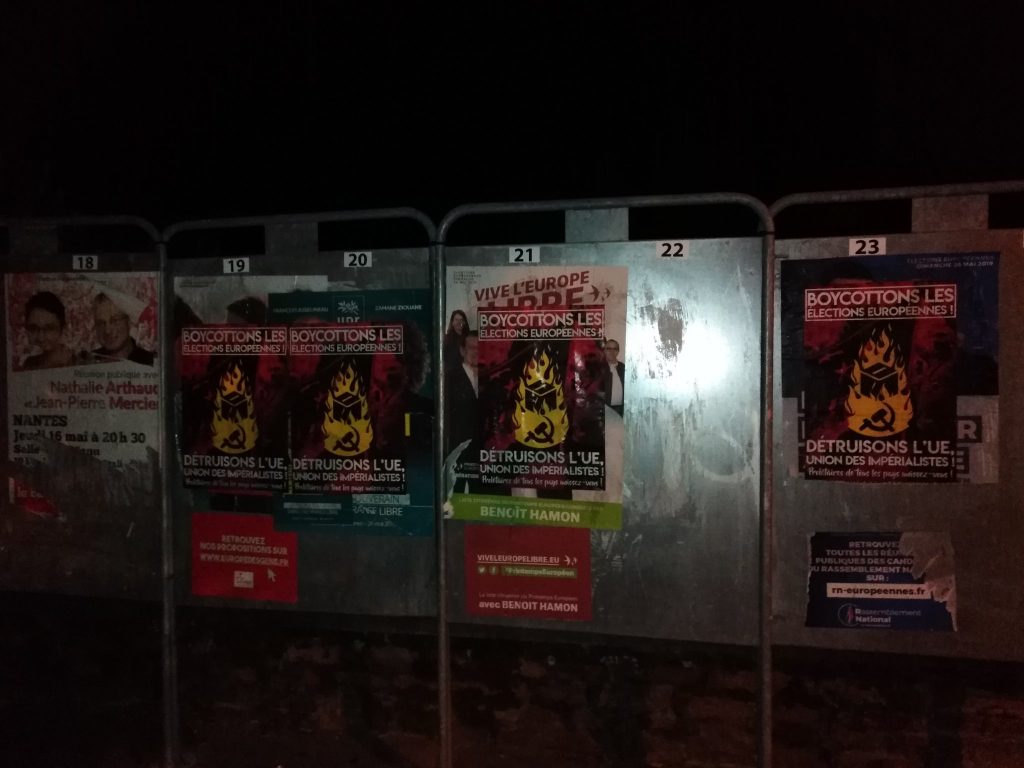 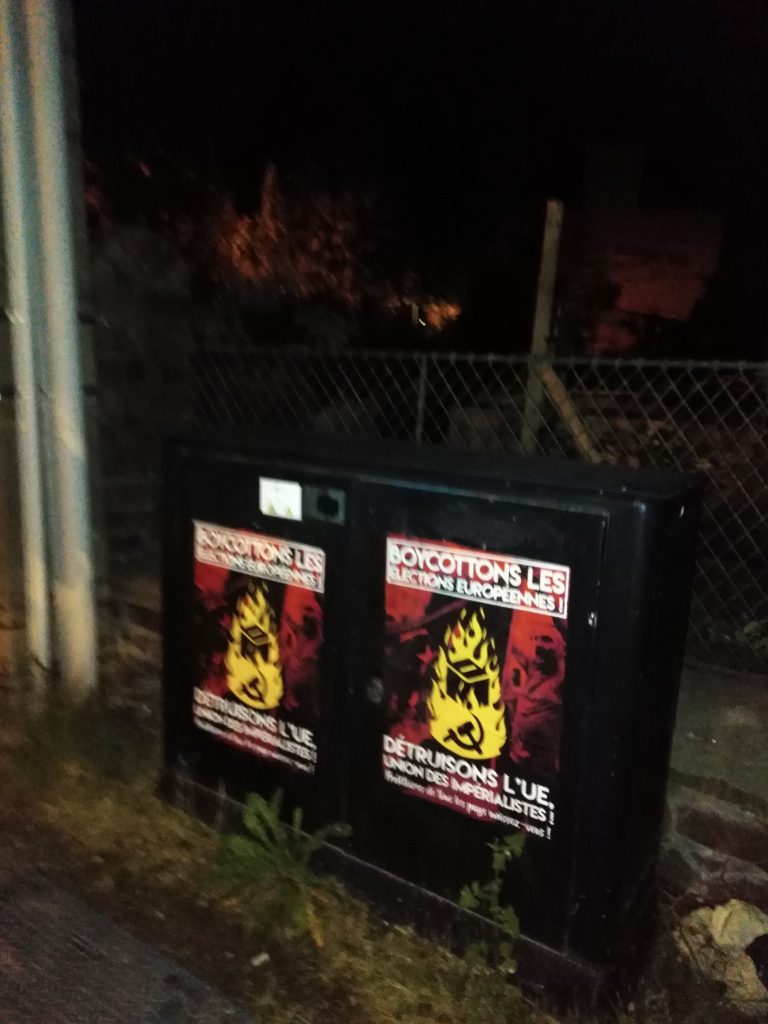 In Austria, comrades of the Red Front Collective and Partizan organized events under the title “Down with the EU” in both Vienna and Innsbruck, mobilizing with dedicated leaflets in German as well as in Turkish. Also, with attendance of activists from Turkish and Austrian organizations a series of unannounced manifestations was held throughout the city of Linz, blocking traffic and shouting slogans. During this actions a banner with the slogan “Down with the EU and Imperialism” was carried and print-outs of the campaign poster were carried. Turkish comrades have uploaded a video of the action: Nieder mit EU! Es Lebe der Internationalismus 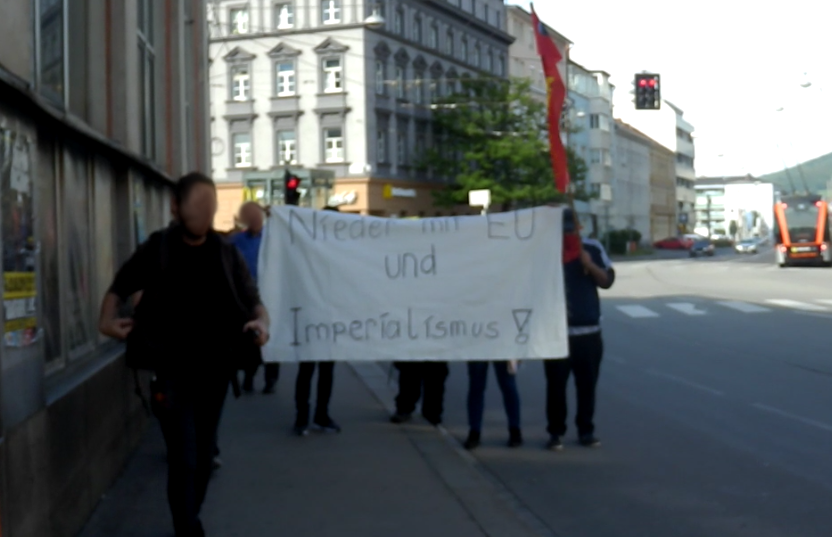 In Sweden comrades in Stockholm have produced dedicated stickers calling for the boycott and broadly, spreading them in order to agitate the masses to deface electoral propaganda with it. Scores of posters were covered by means of this. These actions were flanked by the issuing of statements and the drawing of at least two wall paintings with the slogan “Boycott EU-Elections”. 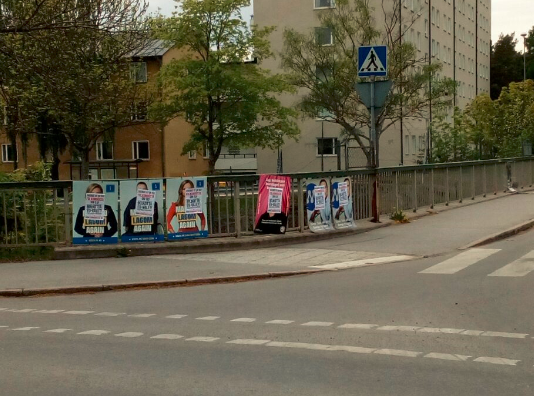 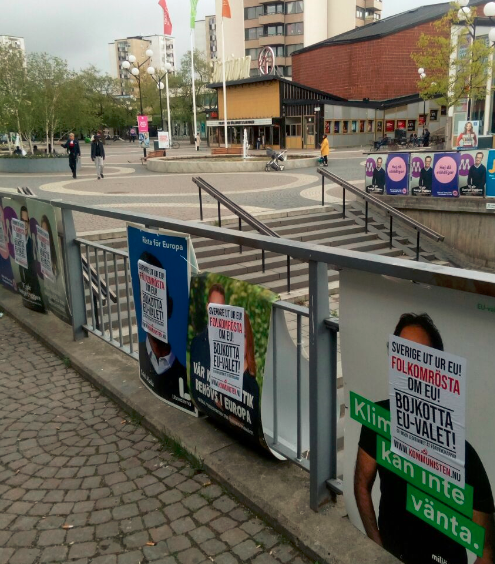 Forces in Gothenburg rejecting the election also picked up the question of agitating the masses for boycott. In a spree of actions, posters were covered with hammer and sickles in red paint, slogans we spread on the walls banners calling for boycott were put up. 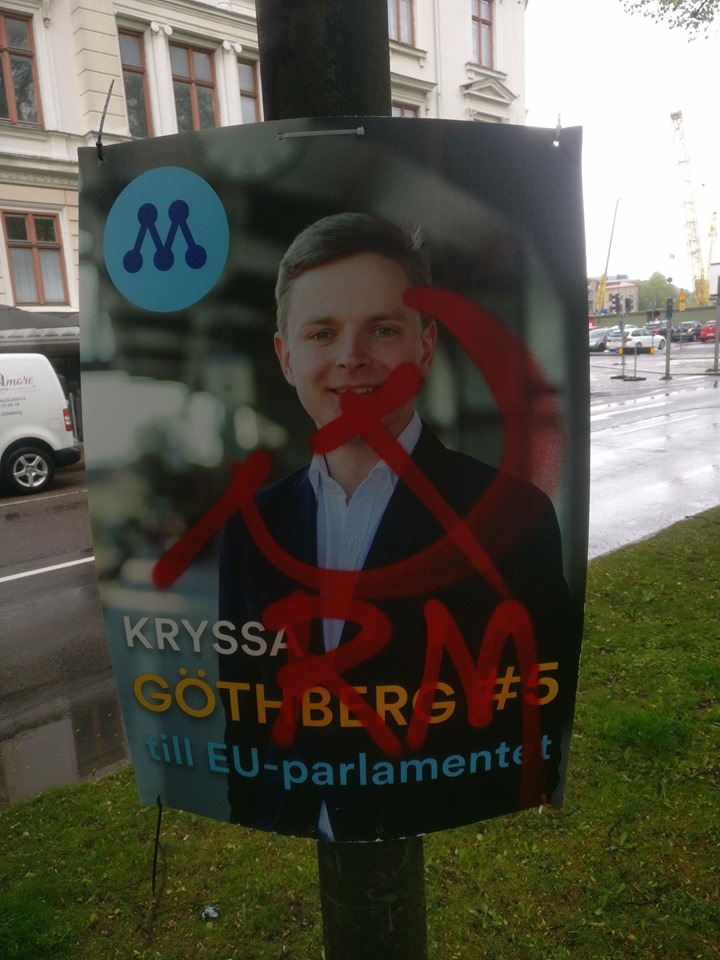 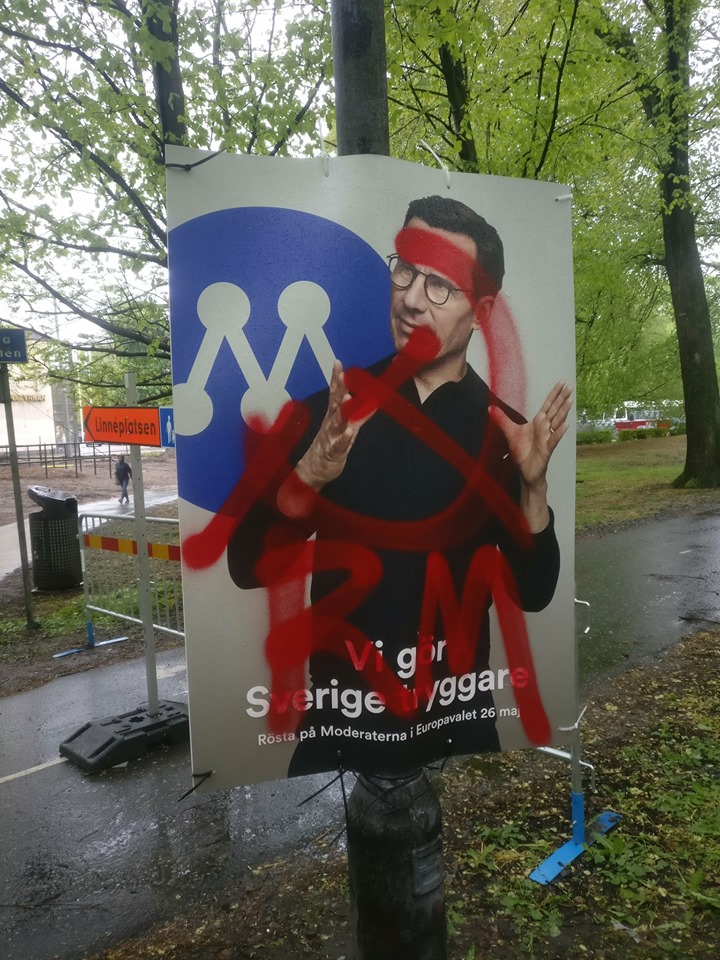 Hammer and Sickle in Gothenburg

Comrades in Denmark translated and disseminated the joint international call for boycott in the form of a leaflet and on their website. At least two wall paintings with the slogan “Elections No – People’s War Yes” were painted, one of them across of a school and close to a train station in a proletarian neighborhood.

In Germany, hundreds of posters of the international campaign were put up in the streets, particularly in the cities of Hamburg, Weimar and Essen. Bourgeois elections propaganda was covered en mas, putting a particular focus on distributing them throughout the proletarian neighborhoods and places that draw attention. 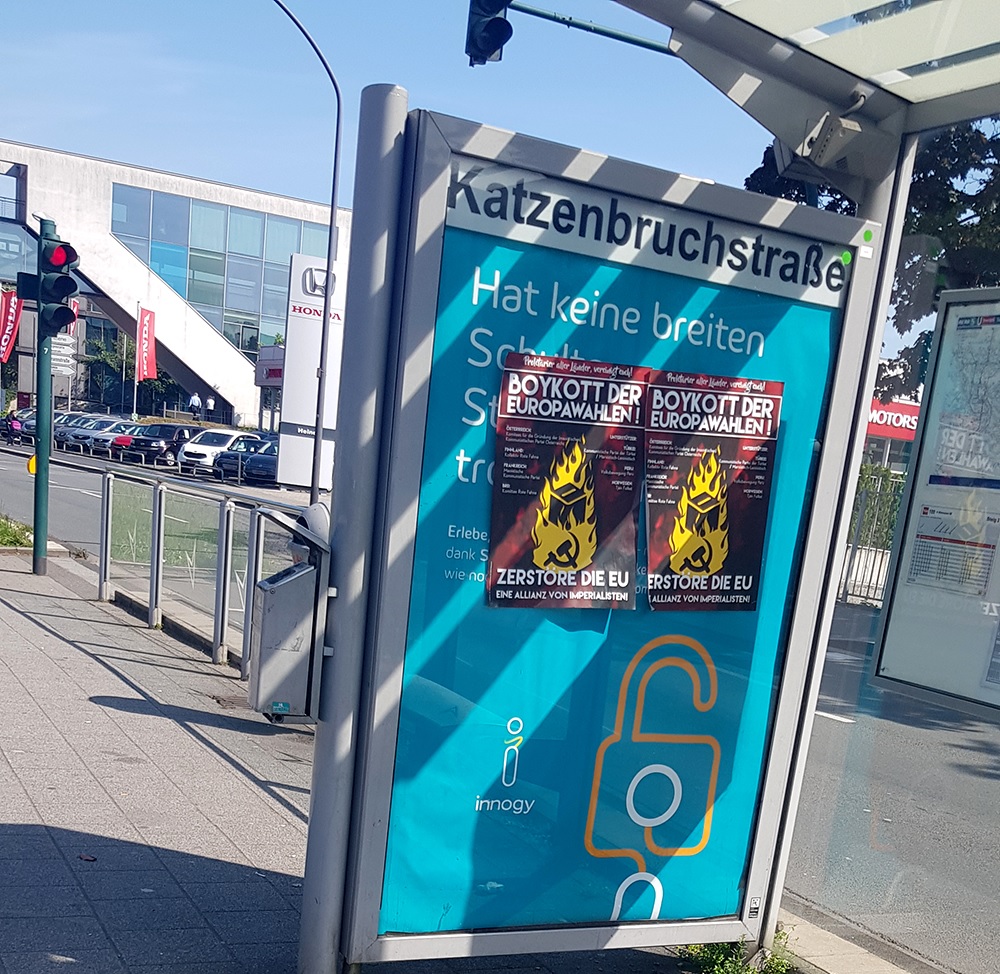 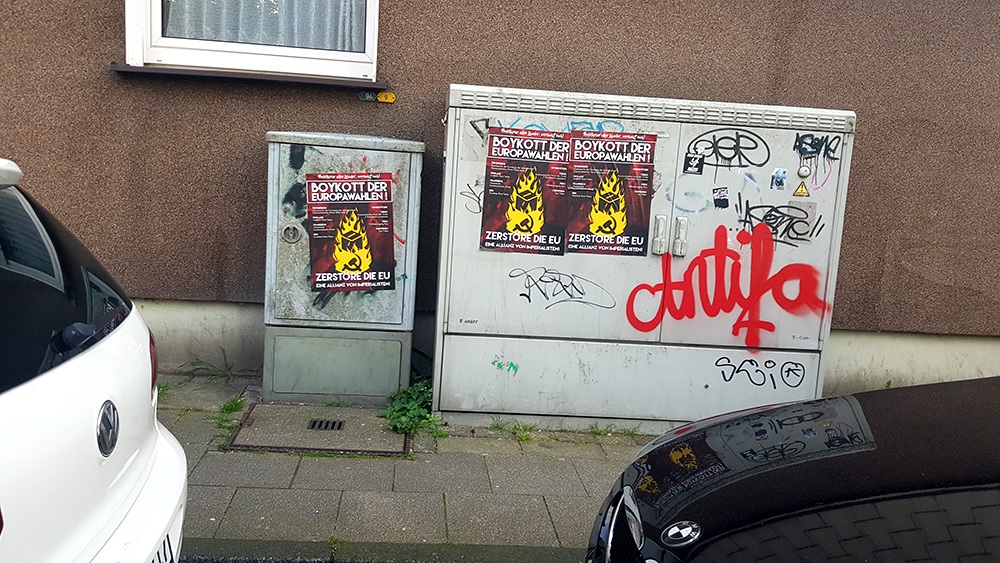 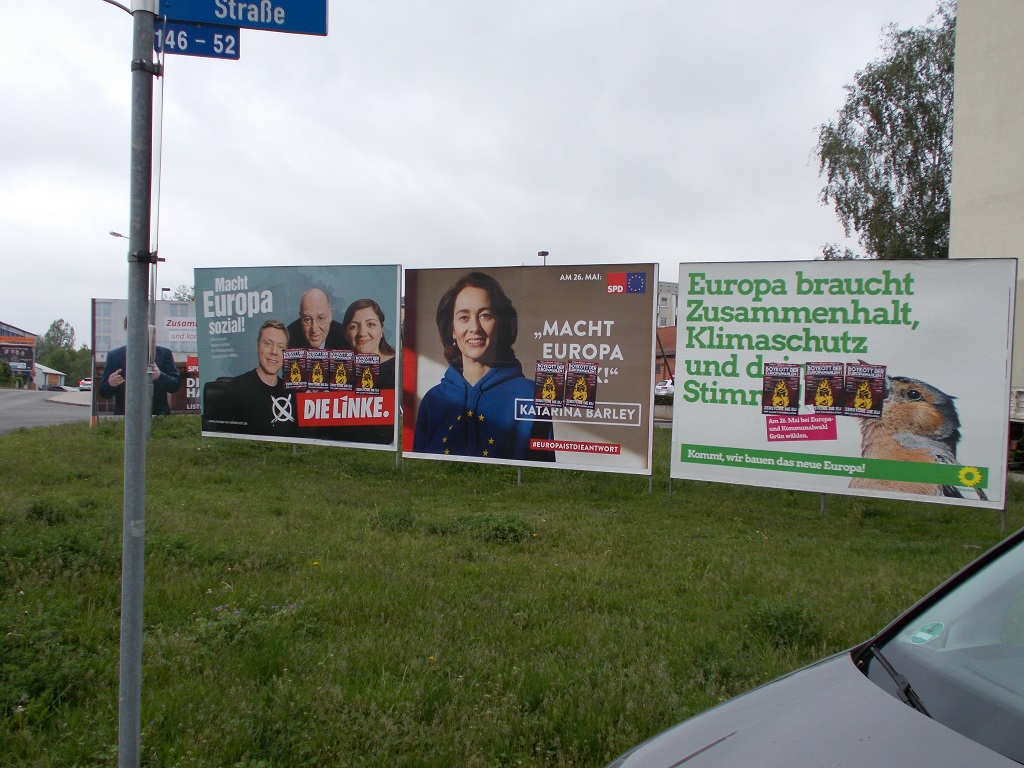 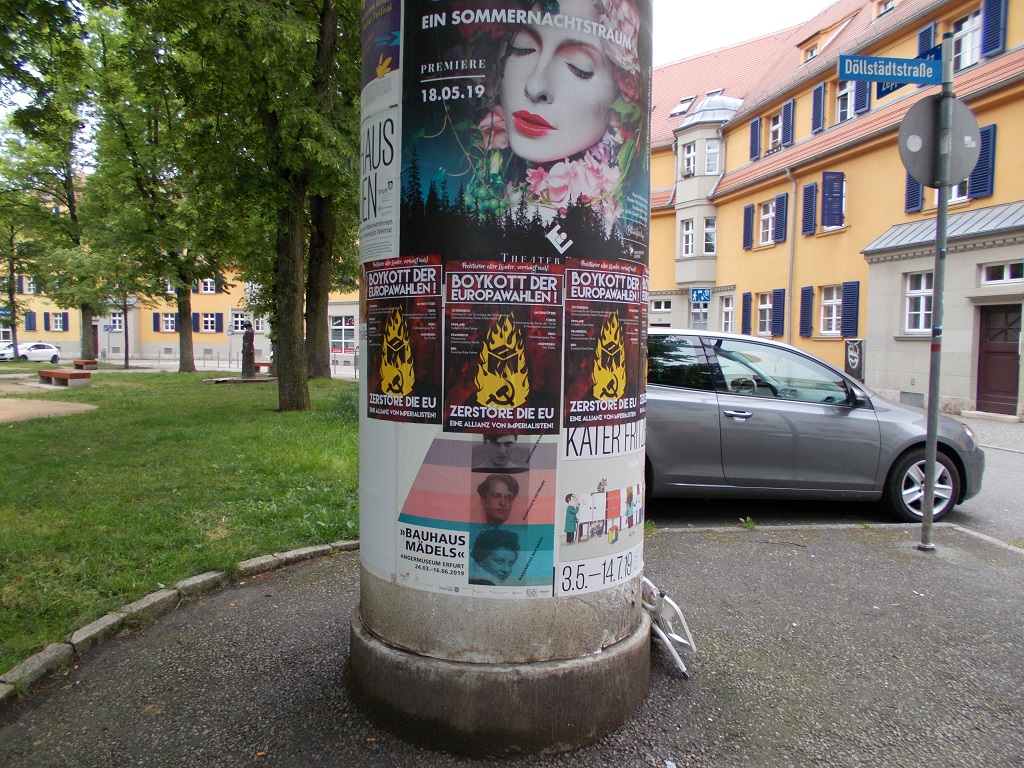 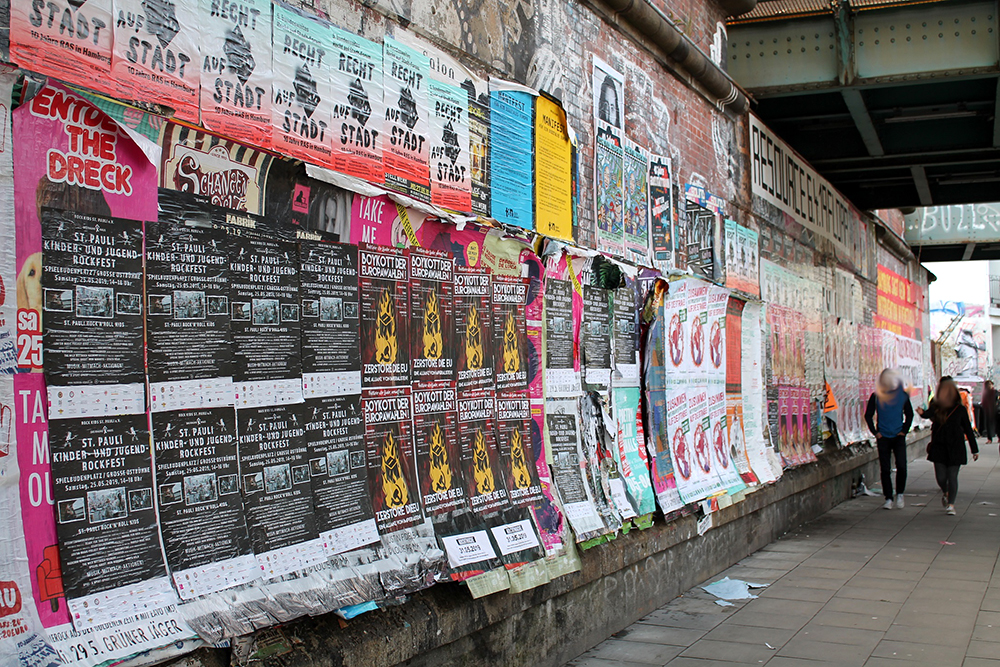 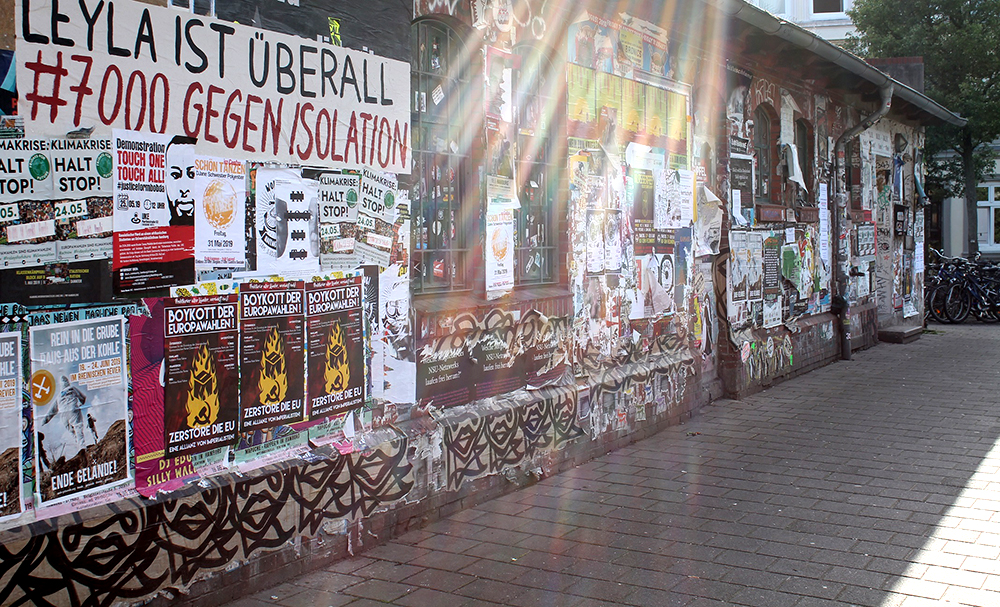 In Bremen, apart from putting up posters, a the campaign slogan was painted on the facade of a bank and, as pictures indicate, the putting up of posters was complemented by massively distributing leaflets in the same neighborhoods. Furthermore, the reactionary electoral propaganda was turned into billboards for the people, by using them as surfaces to attach Dazibaos to. 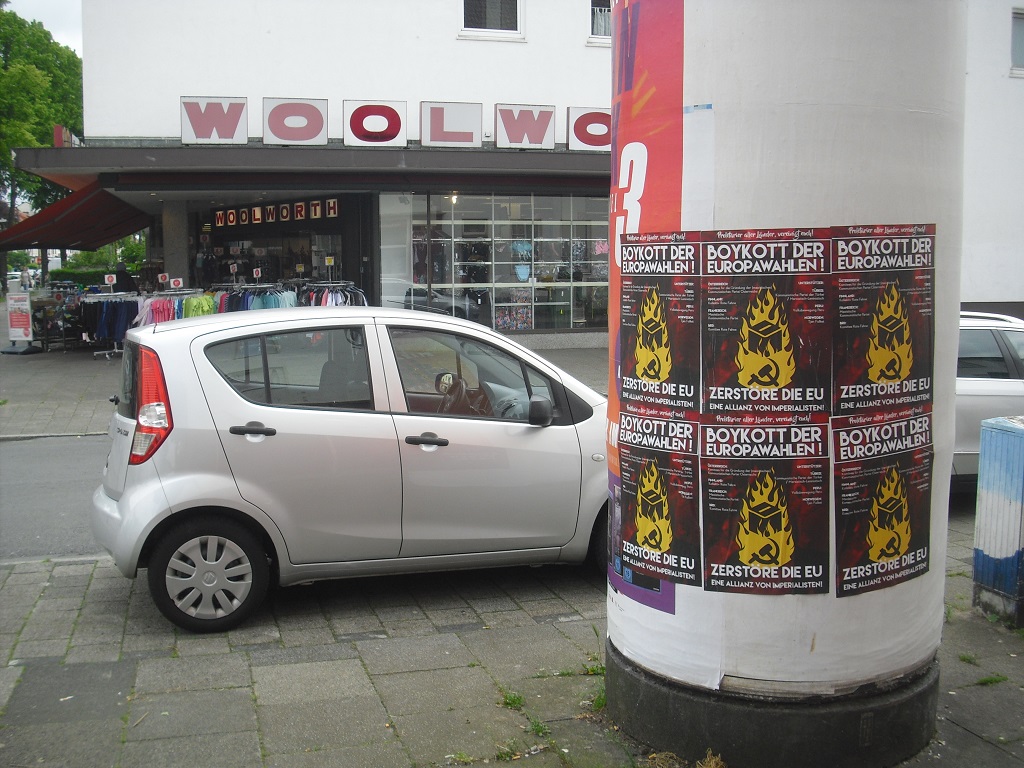 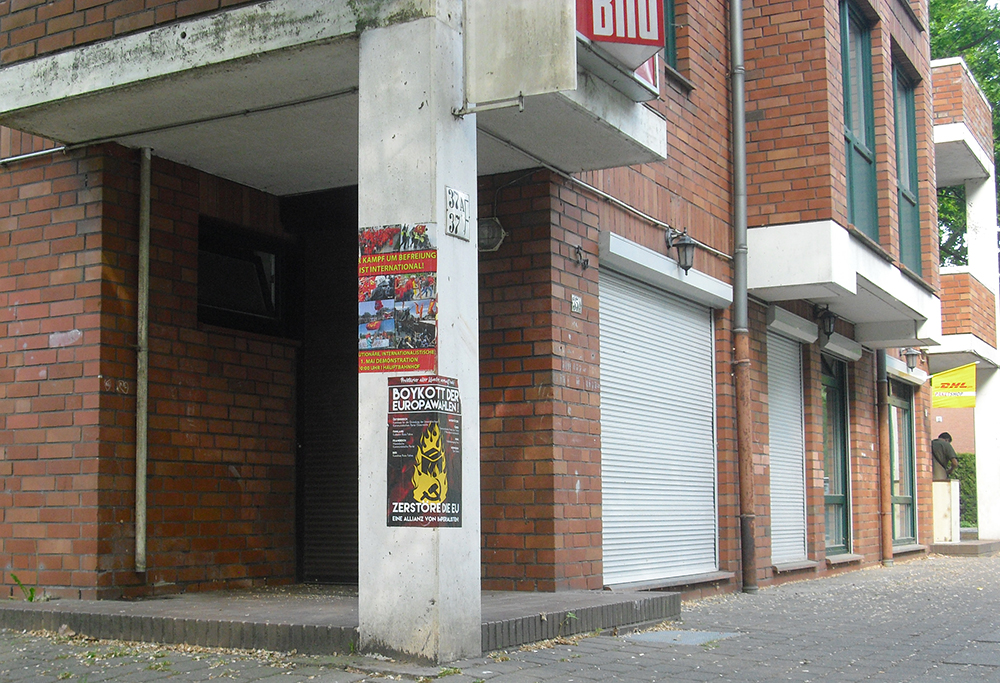 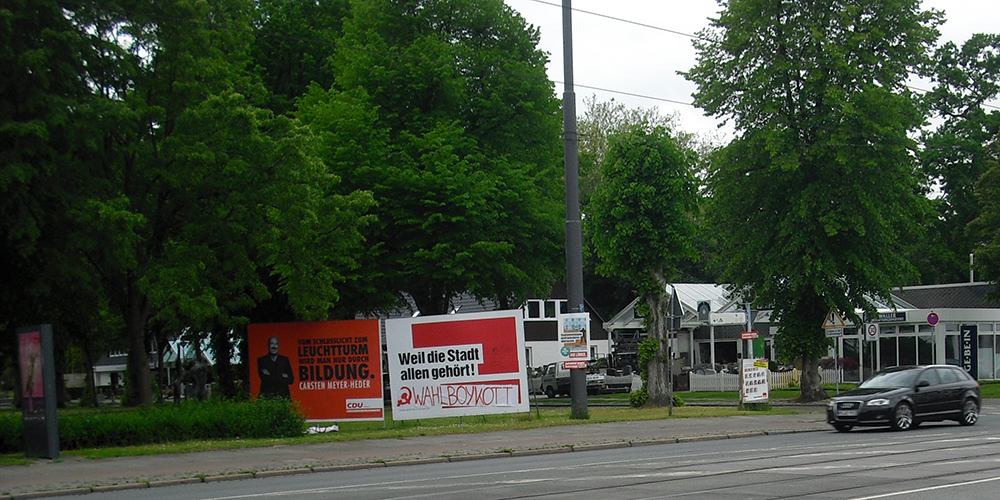 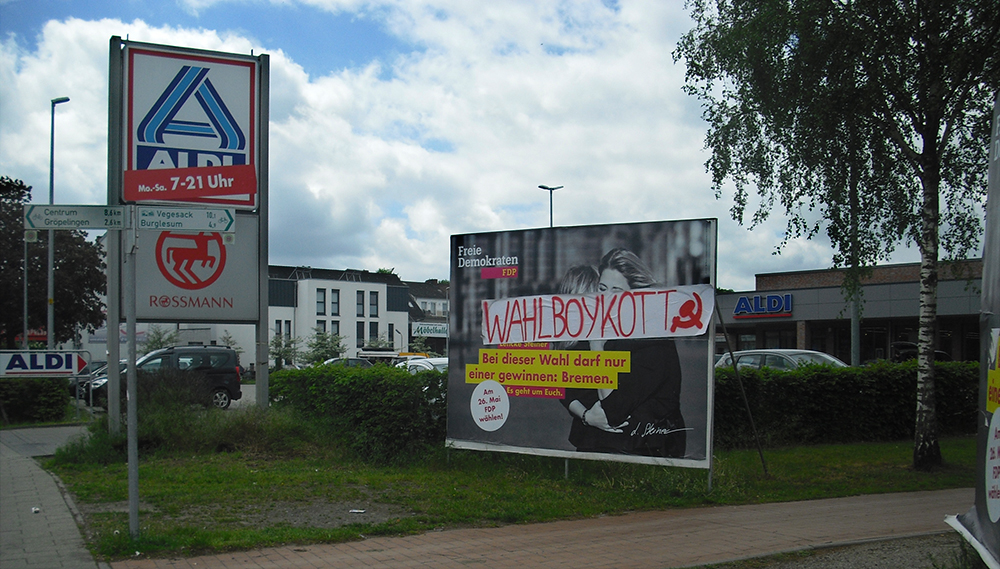 In Berlin reactionary electoral propaganda was over-painted with slogans. Furthermore, leaflets calling for the boycott of the elections were distributed in demonstrations take place in the city, such as the Fridays for future demonstration. Posters were hung up in areas with a strong presence of “the left movement”, but mostly were spread throughout the more proletarian neighborhoods of the city. 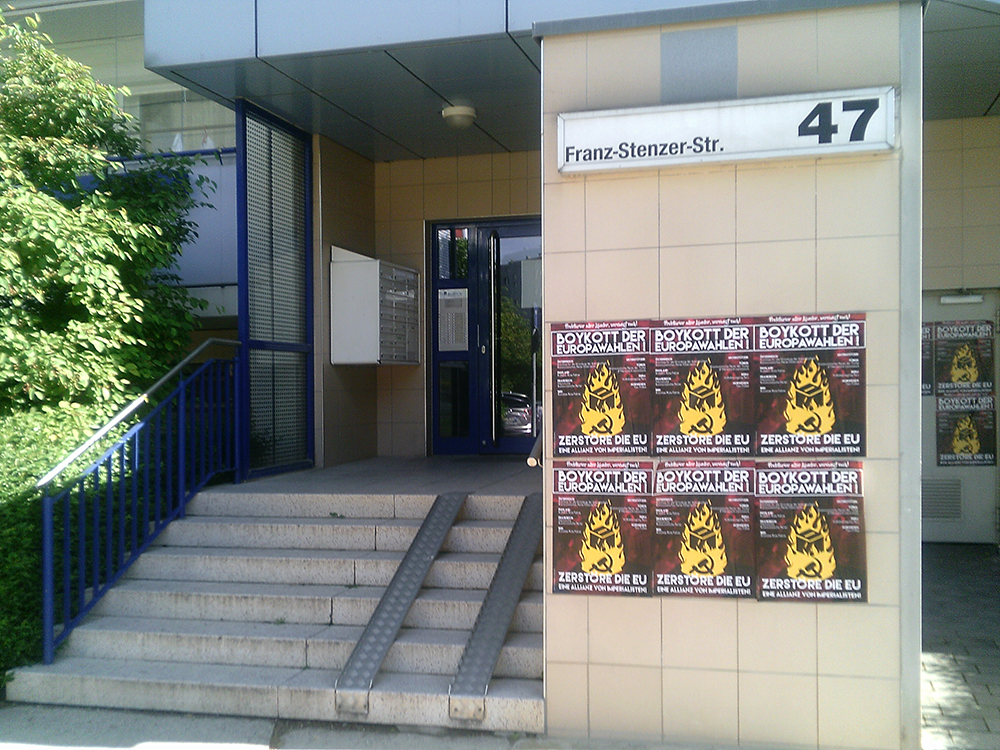 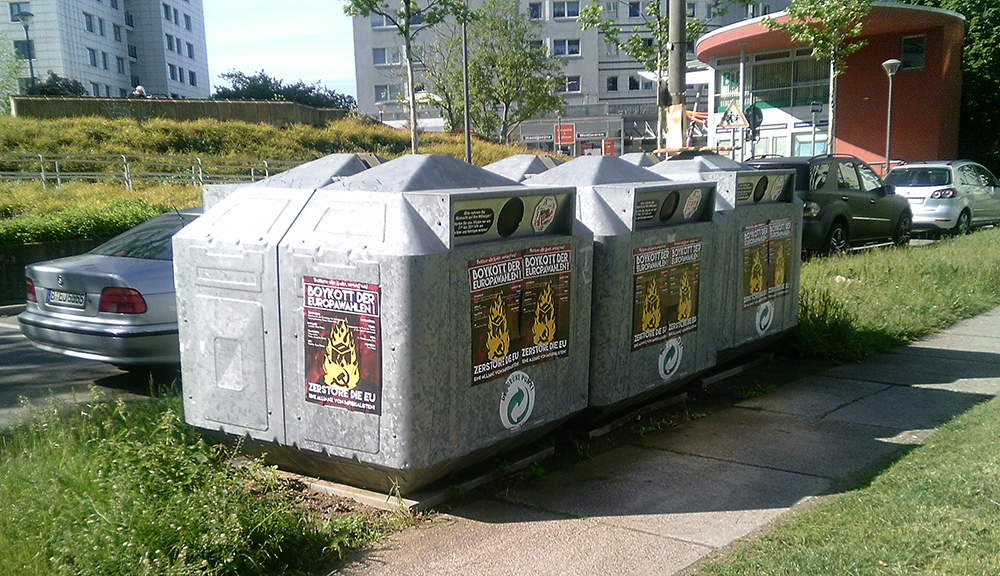 Apart from these actions of forces that took firm decision to support the necessity of boycott from a decided Marxist-Leninist-Maoist viewpoint, there is, of cause, in every EU country an enormous amount of undocumented and unclaimed but nevertheless unconciliatory and belligerent actions of the masses. The masses and those having the interests of the proletariat and the people at heart reject these elections. Every cycle of electoral campaigning the creativity of the masses in trashing, defacing, toppling, cutting apart, burning and otherwise attacking the bourgeois parties takes new paths, from the simple “Hitler mustache”, to a hand-drawn slogan or a well aimed kick, to more sophisticated actions like the documentation of torching electoral propaganda materials or even four consecutive attacks on mayor party offices, as was mentioned by the bourgeois press to supposedly also have taken place during this years electoral farce in a large German city

As a video of one such action was send to us, it will be documented in the following:

AUSTRIA - Action in rememberance of the fallen heros Nubar and Rosa

EUROPE - Protests and struggles: A short review of September